I'm having trouble figuring out how to trigger interrupts with buttons on my Arty Z7.

I have done this successfully with an original Arty Artix 7 and Microblaze using the same sample code provided in Vivado SDK (although conditionally compiled differently) - see https://forums.xilinx.com/t5/Processor-System-Design/ERROR-in-SDK-Example-xgpoi-intr-tapp-example-c-on-VCU108-board/m-p/1070426#M51197 .

The design is very basic, and the mappings to the buttons were chosen to match the sample code (xgpio_intr_tapp_example.c). The program compiles and runs fine, but does not generate interrupts on button press; it times out per the code. The GPIO-Zynq interrupt connections are a reasonable guess based on this video: https://www.youtube.com/watch?v=JPVTVNtJ7R4.  (Same result with or w/o the concat.)

A sister example program - a non-interrupt based button reporter (xgpio_tapp_example.c) - works fine, so the external connections in the board design seem okay.

I have checked all the #defines through to xparameters.h, etc., and they seem to be mapped to the correct values (don't know how to confirm that XPAR_FABRIC_AXI_GPIO_0_IP2INTC_IRPT_INTR should be 61U).

If it is possible to step through the code in the SDK with breakpoints on the fly and read the variables, I don't know how. I'm using 18.3. 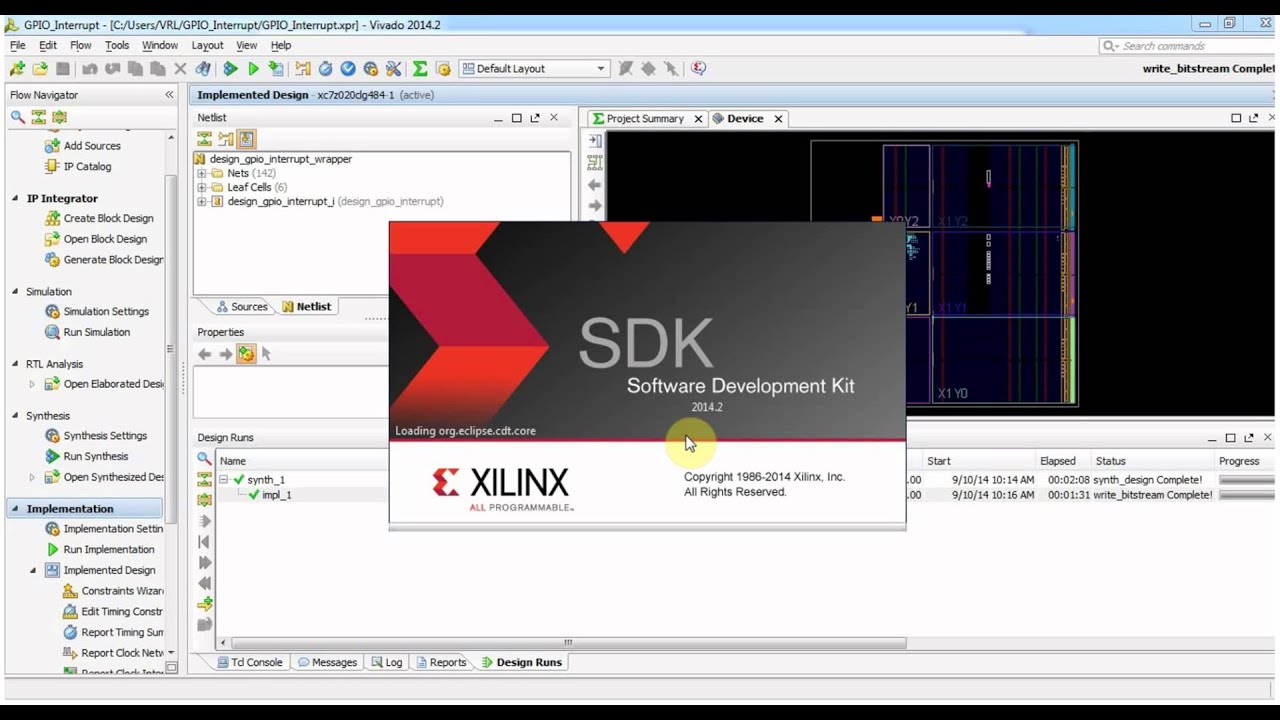 Solving this problem just about broke me:

I don't know how 0xF8 got in there. I don't understand enough about the function call, even after reading the cryptic in-code comments, to change it. And it still isn't clear why 0xF8 would fail (other than it set interrupt priority to nothing?).

Aside - as part of the debugging, I added an AXI_Timer module and built its interrupt example project. The sample code included a reference to XPAR_INTC_0_TMRCTR_0_VEC_ID , which was not automatically generated in xparameters.h . I changed it to XPAR_FABRIC_AXI_TIMER_0_INTERRUPT_INTR, then the sample code ran as expected. Maybe I just got lucky?

After rebuilding my project from scratch, rewriting the sample code, then discovering the 0xA0 substitution, I went back to my original project where I was having problems. Surprisingly, it was configured for 0xA0, not 0xF8. More surprisingly, it ran correctly. Might have been some other glitch in the toolchain creating the original failure.

Hi , could you explain me how you get Arty 7 interrupt working.I am stucked about two weeks on that and i can not get this explicitly working.

I got absolutely no response to my most recent post to this forum - https://forums.xilinx.com/t5/AI-Engine-DSP-IP-and-Tools/SPDIF-clocking-woes-among-others/m-p/1079787 .  Blocked from further progress, I moved on to other, non-FPGA projects.

So I'm a little stale, and clearly was never expert.  If you post descriptions with relevant details about what you've tried, and indications of failure/partial success, I'd be happy to take a look.  (I only have access to Vivado 18.3.)   If you're lucky, someone who actually knows will chime in.

Artix-7 Arty Base Project Part 1: Vivado design
youtube.com/watch?v=GyFTMwBjyOY
In the first part of this tutorial, we put together a Vivado design for the Artix-7 Arty FPGA board from Digilent. The design contains most of the hardware p...
1 Kudo
Share
Reply

548 Views
I am sorry for my late replay, Is Ok.My bunch of knowledge of Xilinx keep growing.I solved the Rx interrupt problem. and also TX(at TX i can choose the trowput rate , timeout problem with RTS/CTS or ACK/NACK (is not in this problem where have no RTS/CTS and no need for confirmation) and now i have only two questions 1.latency of FIFO interrupt which evaluate in disassembly and 2.id xon/off can be apropiate)
0 Kudos
Share
Reply